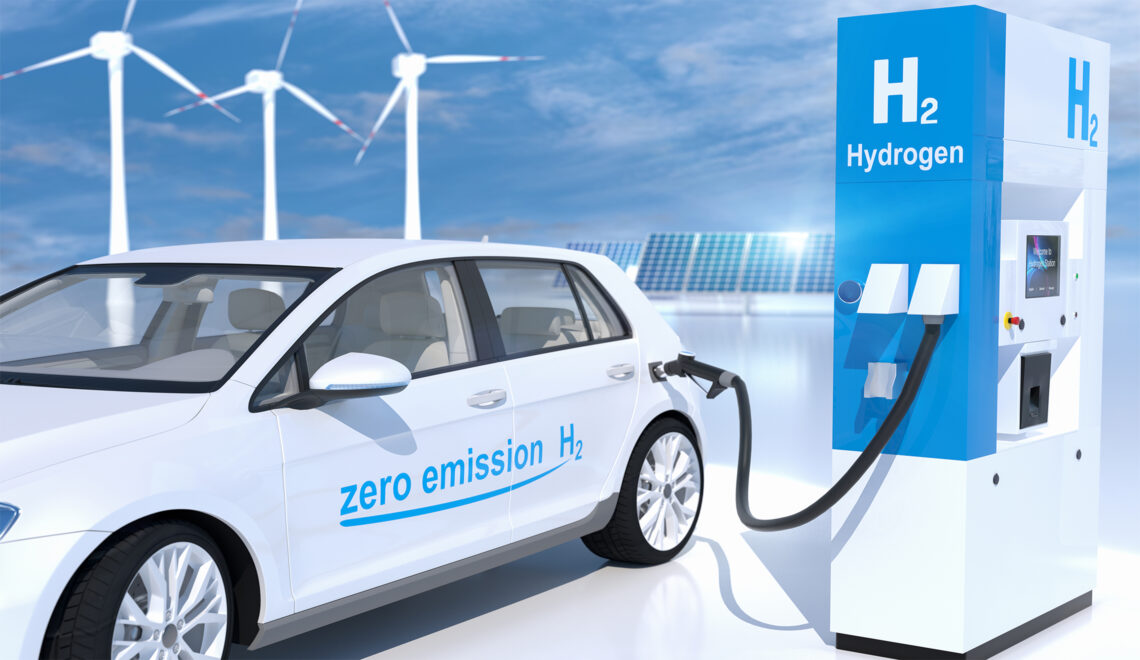 It may be interesting to know that Hydrogen, which is the most abundant element on earth, does not exist in its free state. Hence, it needs to be separated from chemical compounds using various technologies such as steam methane reforming, partial oxidation of oil, coal gasification, and water electrolysis.

Grey hydrogen is produced via a process called steam methane reformation (SMR) of natural gas and these emit large amounts of carbon dioxide. Majority of hydrogen today is Grey Hydrogen.

Green hydrogen on the other hand is produced using electrolysis of water with Renewable Power. In this process, the water is split into Hydrogen and Oxygen using renewable energy resources such as onshore and offshore wind, solar power and Hydro.

Electrolysis of water requires electricity for production of Hydrogen, which makes Hydrogen more expensive than the fuels it would replace.

Such “Green Hydrogen” finds numerous applications ranging from industrial feedstock to fuel cell vehicles and energy storage. The concept of Green Hydrogen is still in its nascent phase and many organizations are investing in setting up new Green Hydrogen production plants that would help in reducing GHG emissions.

With more integration of renewables, the peak production will happen during mid-day and the peak demand will continue to occur during mornings and evenings. This will pose risk of grid collapse unless the additional energy being pumped in is stored suitably for utilization later or it is used for some other purpose.

Renewable power can be wheeled at a nominal cost to the application hub where Green Hydrogen can be produced using this power.

The Power to Hydrogen (P2H) system is based on absorption of excess renewable electricity by electrolysers to generate Hydrogen which can have several uses. It can be consumed by the fuel cells, stored in Hydrogen tanks, injected in gas grids or combined with carbon di-oxide to generate synthetic methane. Rather than curtailing the excess generation, a P2H system acts as a carrier to convert this electricity surplus to generate a chemical energy carrier (like Hydrogen).

The generated Hydrogen gas is considered to be stored in an energy storage medium like Hydrogen storage tanks which are similar to batteries but use compressed Hydrogen as the energy carrier. The stored Hydrogen in the tanks can be utilized by a fuel cell to generate electricity.

Thus, a P2H system comprises of three main components, the Electrolyser (to generate Hydrogen from excess renewable electricity), Hydrogen tank (to store Hydrogen to use in the system when required) and Fuel Cell (to convert stored Hydrogen into electricity).

The production of Hydrogen from renewable energy sources could be the solution to long-term energy storage and provide an energy vector with a variety of uses and excellent environmental characteristics. In particular, Hydrogen could be further converted into synthetic methane by using carbon dioxide from Anaerobic Digester plants which could be injected into Natural Gas pipelines, could be used in heating applications, and in Fuel Cell vehicle applications with almost zero emissions.

India is the world’s third‐largest energy consumer and its energy use has doubled since 2000, with 80% of demand still being met by coal, oil and solid biomass.

As per IEA India Energy Outlook 2021, to meet the growth in electricity demand over the next twenty years, India will need to add a power system the size of the European Union to what it has now.

India imports 85% of its Oil needs and spends almost Rs. 12L Cr over energy imports in the form of Crude Oil and Natural Gas. Green Hydrogen can help reduce these growing imports.

This Independence Day (2021), the Honourable Prime Minister Narendra Modi announced the launch of National Hydrogen Mission with a target to make India a global hub for production as well as export of Green Hydrogen.

This can prove to be a huge step by the Government of India, as for Aatmanirbhar Bharat, energy independence is very crucial.

Furthermore, India has voluntarily committed to reducing greenhouse gas emission intensity of its GDP by 33-35 per cent below 2005 levels by the year 2030.

Use of Green Hydrogen as Industrial Feedstock can be the low hanging fruit for us as the only change in this case will be in Hydrogen Generation Technology.

Green Hydrogen offers a ray of hope in decarbonizing the “hard-to-decarbonise” sectors such as steel, refining, shipping etc. Shifting from natural gas/ coal to green hydrogen can help decarbonise these sectors.

Green Hydrogen can be an alternative to Pulverised Coal Injection improving the performance of the traditional blast furnaces.

It can also be used as an alternate reductant in Steel making with Green H2 separating Oxygen from Iron Ore. Iron is produced in this process with water as the other by-product and this iron is called as Direct Reduced Iron (DRI). Oxygen produced during the water electrolysis process can be readily used in the Steel Industry.

The Niti Aayog envisages the roll out of Hydrogen mission in phases and the first phase focuses on Demand Creation of Green Hydrogen. Primary use is anticipated to come from industrial applications like oil refining, fertilisers, steel, heavy duty transport and Industrial heat.

Oil refineries and Fertilizer companies use Hydrogen in large quantity. According to TERI, India currently produces 6 Mt of hydrogen. As of now, this Hydrogen is mostly produced using Steam Methane reforming process which produces the most cost-effective Hydrogen.

India is abundantly blessed with renewable energy resources. Therefore, with the right policies and implementation in place, it can become a net exporter of Green Hydrogen to the entire world.