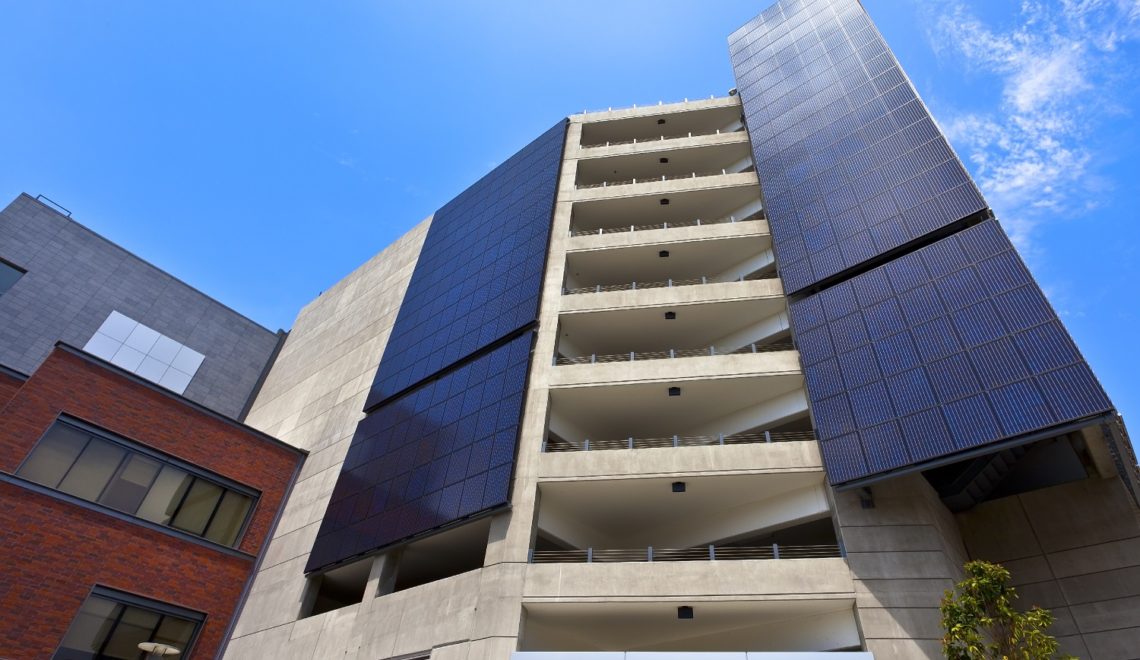 Building integrated photovoltaics (BIPV) are photovoltaic materials that are used to replace conventional building materials in parts of the building such as the roof, skylights, or facades to generate electricity out of sunlight. In addition to power generation, BIPV retains properties of conventional building materials like insulation, heat absorption and cooling qualities. As solar energy moves into the mainstream, there has been a noticeable shift form perceiving solar as primarily a retrofit option to a building’s energy profile. With majority of new building construction today being designed with sustainable energy footprint in mind, BIPV systems offer an ideal solution.

BIPV can be used as roof or exterior walls, either over the entire façade or specific areas. Curtain walls provide great architectural accents while supporting the ventilation capabilities of a building. Skylights and windows allow for daylighting and reduce glare and heat transfer, offer thermal insulation, noise protection, among many other qualities. The combination of being architectural building blocks as well as passive and active solar components make BIPV an alluring solution property owners, developers and builders alike.

Additionally, BIPV provide a perfect platform for design customization, therefore do not hamper the aesthetic appearance of a building. BIPV cells and glass can be tailored in shape and colour to match one’s personal taste. Besides being a building material and energy generator, BIPV panels can also be utilized as branding and marketing tools as well. Technological maturity, cost competitiveness, improved conversion efficiencies and innovative materials make building integrated photovoltaics an increasingly attractive proposition that goes far beyond mere energy generation.

New trends in BIPV solutions are focused on applications as diverse as outdoor urban utilities such as benches, tables or canopies. These innovative solutions have been developed with the aim of making the traditional outdoor furniture as micro grids feeding into the existing power distribution system.

Another key aspect for adoption of BIPV is the space for solar installations, which is a premium in high-rise urban buildings. Traditionally, roof space is often the limiting factor in determining the size of solar plant in a building. Because BIPV has the capability to transform other building surfaces into high-yielding power plants, it will play an increasingly important role in sustainable urban development.

However, there are some key challenges which is deterring mass adoption of BIPV systems. One of the major hindrances is the high initial investment cost associated with it. Unlike conventional PV modules, where module designs do not vary greatly from one application to another, BIPV products vary from installation to installation. This level of customization is a market requirement as every building is different, especially in the retrofit market; in turn adversely affecting scalability. Without mass production and economies of scale it will be very difficult for BIPV systems to be cost competitive to traditional PV modules. Although BIPV systems offer an offset value in the construction process with replacement of traditional building materials and the dispensation of rack-mounting hardware, still it is not quite enough for mass adoption.

Another factor to consider is performance and longevity of the PV system. BIPV modules usually experience higher operating temperatures because, unlike rack-mounted modules, they are flush with the building surface and do not permit airflow between module and structure. Sustained higher temperatures may result in decrease in conversion efficiency and accelerated system degradation.

The several state-of-the-art BIPV products on the market today offering a wide range of integration of photovoltaic (PV) systems into buildings. Continued research and development will yield better BIPV solutions in the years to come, with respect to increased solar cell efficiency, reduced production costs and improved building integration. New and innovative solutions may reduce costs and increase acceptability in the market such as paint applications of PV cells. The research and development of BIPV solutions for the retrofitting market is of great importance as the volume of existing buildings is many times greater than the volume of buildings to be constructed in a foreseeable future. Furthermore, a robust net metering system has to be put in place for feeding the grid with electricity generated through these BIPV systems.

With all pieces of the puzzle in place, BIPV systems may well represent a powerful and versatile tool for achieving the ever increasing demand for zero emission buildings, while offering an aesthetical, economical and technologically viable solution.