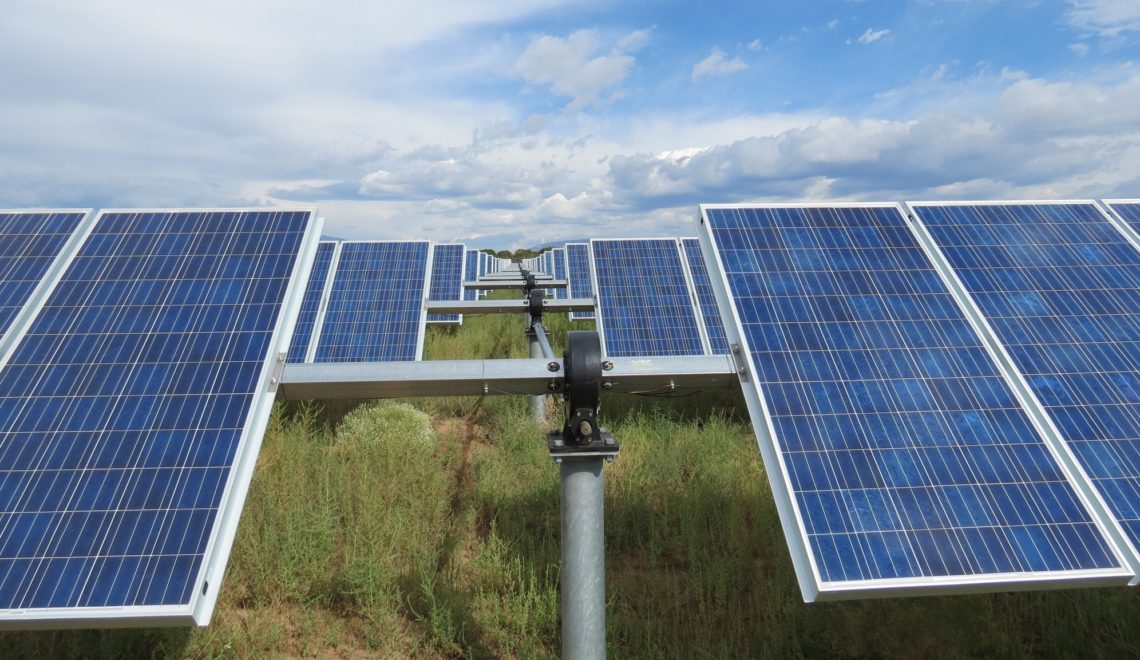 Solar module tracking systems are motorized mechanical racking systems that orient a solar array towards the sun. A tracker optimizes the angle at which panels receive solar radiation thereby maximizing electricity production of a solar plant. The angle at which the sun’s rays meet the surface of the solar panel determines how well the panel can convert the incoming light into electricity. This is known as the “angle of incidence”. The narrower the angle of incidence, the more energy a photovoltaic panel can produce. Solar trackers help to minimize this angle by working to orient panels so that light strikes perpendicular to the surface of the panels.

There are primarily two types of solar tracking systems, namely single-axis and dual-axis. A single-axis tracker moves the solar panels on one axis of movement, which allows the panels to arc from east to west and track the sun as it moves through the sky. A dual-axis tracker allows panel movement on two axes, aligned for both north-south and east-west. This kind of a system is designed to further maximize solar energy collection throughout the year as it not only tracks the daily east-west motion of the sun but also adjusts for seasonal variation in the path of the sun.

Benefits and drawbacks of solar trackers

The biggest benefit of a solar tracking system is that it offers a boost in electricity production when compared to a similar sized static solar plant. Generally, a plant installed with a single-axis solar tracker sees a performance gain between 20 to 30 percent. A dual-axis tracker further increases performance up by another 5 to 10 percent. Which means a dual-axis tracker system increases performance efficiency by up to 40%. Especially, in high latitude locations where the sun’s position in the sky varies dramatically between summer and winter months, a dual-axis tracking system is an effective way to maximize solar production.

Though trackers are a fantastic system for increasing the energy output from a PV plant, there are a few considerations to bear in mind. Tracking systems attract substantially higher installation and maintenance costs over static solar plants. A solar tracker will cost more money because it is a complex technology and has moving parts. With a more complex system comes more maintenance, which add up in cost over time.

Another disadvantage of a solar tracker is that they are not viable for rooftop solar installations, which is usually characterized by lower installation cost and ease of maintenance. Moreover, since tracking requires panels to be offset a significant distance from each other to allow for movement. This substantially limits the number panels that can be installed as well as make the system too heavy for rooftop applications.

The future of solar tracking systems

Solar trackers offer the greatest value proposition in large ground-mounted solar installations, especially in high latitude locations where there is extensive variation in the path of the sun between summer and winter. In these large commercial projects, the long-term benefit of increased production is enough to offset the initial investment cost and maintenance costs. However, as solar panels get cheaper, the cost effectiveness of tracking systems versus using a greater number of panels decreases. In the past when photovoltaic modules were comparatively more expensive, and it made sense to minimize the number of panels used in a plant with a given power output.

Therefore, in the current scenario, the economic viability of solar trackers is directly dependent upon the space available to set up a solar plant.