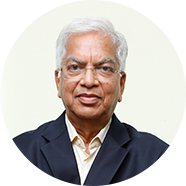 Shri Satish Kumar Gupta - “Daddyji” - as he is fondly called by Jaksonites is the co-founder and Chairman Emeritus of Jakson Group. He is widely regarded as one of the pioneers and “father of the genset industry” in India. With a strong belief in the ideals of hard work, honesty and integrity he has transformed Jakson into a leading business enterprise in the country with a strong footprint in energy, EPC, hospitality and education sectors.

Born to Shri Jai Kishan Gupta and Shrimati Rajkumari Gupta in the year 1936 in Multan, Pakistan, he enjoyed a very healthy childhood, until the partition of India in 1947, when the family had to leave everything behind and migrate to India.

After initial hardships, Shri Jai Kishan Gupta began life afresh in Delhi and started an electrical goods trading company in Delhi. The family was allotted a shop at Kamala Market in Delhi, by the erstwhile Ministry of Rehabilitation, Government of India and Shri Jai Kishan Gupta soon became one of the most successful traders in the market during that time.

Mr SK Gupta began his professional career at a young age of 21, after completing his graduation from Delhi University in the year 1955. He initially worked for the New India Assurance Company and Burmah Shell Company before joining the family business in the year 1958. His entrepreneurial spirit and understanding of market trends helped him tap into profitable business opportunities quite early in his career. Soon after joining the family business, Mr Gupta signed up for a dealership of Kirloskar Motors that provided a major boost to the business. It helped him bag an important tender with the Bhakra Nangal Dam project, one of the most prestigious power projects in the country at that time. The project provided him with a deep understanding of the electric motors industry and helped him grow the business into one of the largest distributor partners for leading multi-national brands like L&T, Siemens, Kirloskar and Cummins.

During the early 70’s, India was going through a phase of rapid industrialization, with increased demand for reliable and uninterrupted power. Mr Gupta foresaw a robust demand for diesel gensets in the future and to tap into this opportunity, set up a small genset manufacturing plant at Mayapuri Industrial Area, Delhi in 1979. The company manufactured 60 gensets during the first year of production, all of which were sold out. The product quality of its gensets created a buzz in the market and drew the attention of global genset market leader – Cummins which offered Jakson the opportunity to be one of its OEMs in India. Jakson became an OEM for Cummins in the year 1982 and that relationship continues till date and maintains a leadership position in the market.

Very early in his career, Mr Gupta realised that customer satisfaction was the key to success in any business. He understood that the way to achieving this is through reliable after sales support, prompt customer service, and meeting commitments and deadlines at any cost. That belief is strongly ingrained in the culture of Jakson and is religiously followed by every Jaksonite. In addition to being a mentor, Mr Gupta currently devotes a lot of time and energy towards various philanthropic activities