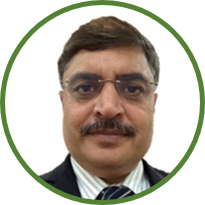 Sh. Jagjeet Singh Deswal is an IPS Officer (Ex.) of AGMUT Cadre, 2008 batch with an illustrious career spanning over two decades in the National Capital Territory of Delhi and the Union Territory of the Daman and Diu. He has served the prestigious Delhi Police as the Commissioner of Police.

As Chief of Police of the sensitive Union Territory of Daman and Diu, he had systematically reformed the functioning of the Police Administration of the territory.

As DCP of Indira Gandhi International Airport, he was instrumental in formalizing non-intrusive and effective policing of one of the busiest airports in the world. As a member of the High-powered Inter Ministerial Committee constituted by the Govt. of India, Mr. Deswal was instrumental in the operationalization of the entire hotel and tourism infrastructure in the Aerocity of Delhi.

As a testimony to his illustrious career as a Police Officer, Mr. Jagjeet Singh Deswal was awarded President’s Police Medal for Meritorious Services on Independence Day-2014. Mr. Deswal is a qualified engineer and MBA. He comes from a family of Civil Servants.