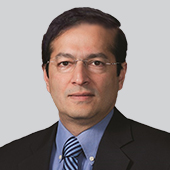 Anant has had a long and valued association with Cummins in India and globally. He was a member of the Cummins Inc. global leadership team from 2009 to 2017. He was also the President of the Cummins Inc. Components Group from 2010 through 2014. Anant was the Chairman and Managing Director of the Cummins Group in India from 2004 through 2017. During this timeframe, he also served as the Managing Director of Tata Cummins Pvt. Ltd., a 50:50 joint venture between Cummins Inc. and Tata Motors Limited.  He also chaired the boards of four other Cummins legal entities in India.

Talaulicar started his career with Cummins in the U.S. in 1986 as an intern and subsequently held several positions both in the United States and in India.  He took up a range of diverse roles in the U.S. for 16 years as financial analyst, manufacturing engineer, project manager, product manager, strategy manager before taking on various general management positions there.

Since 2004, Talaulicar has also led the Cummins India Foundation which has implemented sustainable community initiatives such as model villages and higher education.  He has served as a member of the Confederation of Indian Industry, Society of Indian Automobile Manufacturers and Automobile Components Manufacturers Association.

Aside from his board and trust memberships, Anant Talaulicar is engaged as an advisor to three companies and a start-up.  He is a part time advisor and lecturer at the SP Jain Institute of Management & Research.  He is funding the Usha Jaivant Foundation to educate financially disadvantaged rural youth through college and educating them about important aspects of spirituality, values and life skills.