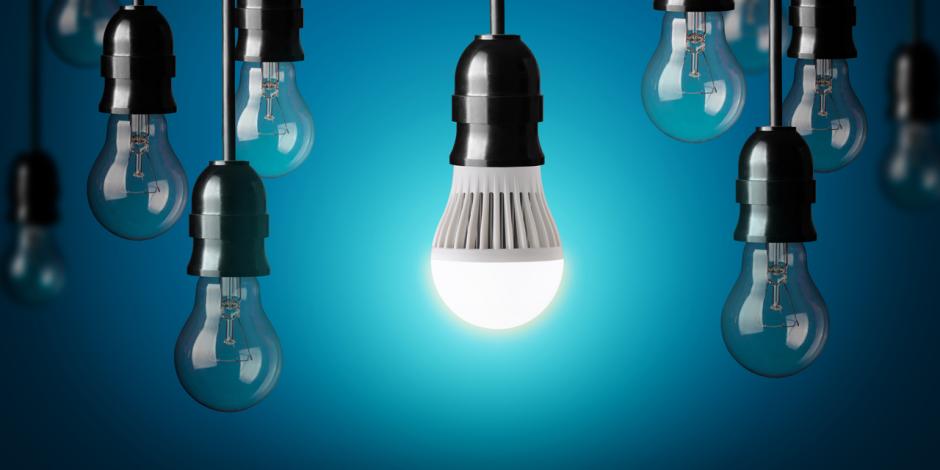 Lighting accounts for about 20 percent of the total energy usage worldwide, approximately 1,944 terawatt hours. Because lighting is relatively simple to upgrade, the trend in recent years is to switch to LEDs. Doing so greatly improves energy efficiency, mitigating impacts of global warming and reducing energy dependence.

What is an LED light?

A light-emitting diode (LED) is a semiconductor light source that emits light when current flows through it. Appearing as practical electronic components in 1962, the earliest LEDs emitted low-intensity infrared light mainly used in remote-control circuits. The first visible-light LEDs were of low intensity and limited to red. Continuous and intensive research and development work into the LED technology led to the development of the first generation of super-bright red, yellow, and green LEDs in the early years of the 1980s. The breakthrough came when ultra-bright blue LEDs were subsequently invented, which formed the basis for the development of cost-efficient and supremely functional white LED lights that are now commonly installed in commercial and manufacturing spaces across the world.

Modern LEDs lights are much more efficient than the first generation LEDs with about 95% of LED bulbs’ energy being spent on light, and only 5% on heat. Thus, LED lights use an impressive 80 percent less energy and last 25 times longer as well than their incandescent counterparts. LED lights have become cost-efficient as well, to be installed on a large scale.

The evolution of LEDs as a source of white light has progressed dramatically in the last two decades, especially in terms of efficacy, measured in output lumens/input watts. The increase in efficacy has been achieved primarily through advances in LED chip technology, and is helping to drive LED adoption. LED products are also more affordable than incandescent bulbs over their life cycle, because their power requirements are lower and the bulbs themselves can last more than 10 years, and compared to incandescent bulbs they are replacing, which often last up to a year or so.

Because LEDs are semiconductor devices, integrating additional electronics in the bulbs, such as occupancy and daylight sensors connected to a network interface, provides the bulbs with new functions. This design enables, for example, the automatic dimming of lights when there’s sufficient natural light in the room, and it senses the presence of people in a room and adjusts overhead lighting accordingly. These capabilities not only provide the optimal amount of lighting throughout a building but also save energy and money.

LEDs also help lower electricity costs in exterior lighting systems. Those used in parking lots, garages, and walkways can be configured to automatically dim or turn lights off when sensors detect an unoccupied area, and much faster than today’s systems. This type of automation is an especially attractive cost-saving option for cities where almost half of electricity budget is devoted towards illumination of streets during the night. LED bulbs are also less prone to cracks and fractures and less susceptible to damage from external temperatures making it more robust and durable than traditional bulbs. Moreover, LEDs lose power incrementally, which allows for easier replacements.

Moreover, LEDs serve as the foundation of networked lighting systems that also provide information to other systems connected to an internal building management network. For example, the heating, ventilation, and air conditioning systems could be alerted that certain parts of the building are empty, and could adjust the temperature or shut off the air conditioning entirely.

Impact of LED lights on economy and environment

Usable electrical energy is a scarce resource worldwide, and as such, the first step towards energy security must be towards encouraging industry and consumers to use energy more efficiently. The use of energy efficient lighting in form of LED lights ensures growth, by making the industries more profitable and competitive.

Additionally, LEDs use less chemicals than some other light products, especially fluorescent lights which typically contain toxic elements like mercury. Fluorescent lights have typically been most common in business use, but they’re gradually being replaced by more cost-effective LED.

The primary reason behind the rise of the LED bulb is the clear-cut money saving opportunity it provides on a recurring basis. Though the initial investment in an LED bulb is a little higher than a similar output incandescent bulb, it more than makes up for it with its better durability, robustness and added service life. Over and above this it also promises a cleaner and greener environment.

Renewable energy and power efficiency management are rightfully seen as important factors for environment conservation. LED is quietly making a phenomenal impact on so many aspects of our lives – from domestic electricity bills, to national economies, and to the very air that we breathe.